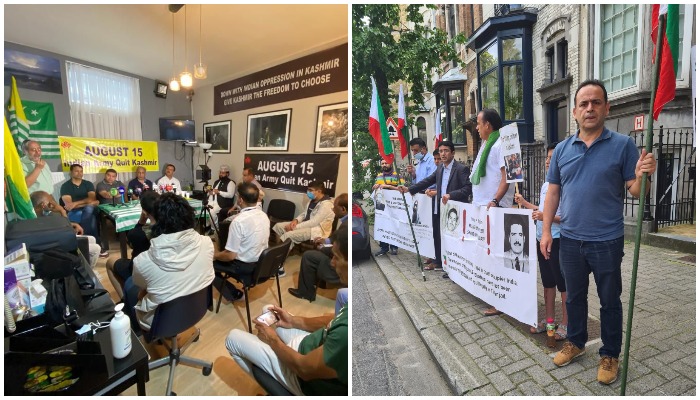 BRUSSELS: Speakers of a seminar titled “Independent India and Occupied Kashmir” organised by the Kashmiri Council Europe (KC-EU) condemned the brutalities against the people of Jammu and Kashmir and called for the end of Indian oppression in the disputed territory.

The seminar was held on Sunday in the capital city of Belgium to mark the ‘black day’ of August 15. It was attended by a number of Pakistani and Kashmiri and European intellectuals and experts.

The Chairman of the International Forum for Justice Human Rights Jammy and Kashmir (IFJHRJK), Muhammad Ahsan Untoo, also addressed the protest in Brussels via a telephonic link from occupied Kashmir. He updated the gathering about the latest situation there.

It is pertinent to mention that Kashmiris on both sides of the Line of Control and across the world observe the Indian Independence Day as “Black Day’’ on Aug 15 every year.

This year, this day was being observed as two years ago, India revoked the special status of the Indian occupied Jammy and Kashmir (IOJK).

The speakers of the seminar called upon the Indian regime to immediately end the military lockdown and release the political figures and activists without any delay. They also asked the Prime Minister of India Narendra Modi to fulfil the promise of his great predecessor Jawaharlal Nehru to give a voice to the people of Jammu and Kashmir and to allow them to determine their own political future.

“We have gathered here against the Indian atrocities against Kashmiris,” he said. “The peaceful struggle for the liberation of Kashmir would be continued.”

Other speakers said that the BJP-led Indian government attempted to repeal the special status of IOJK and erase the identity of the people of Jammu and Kashmir by revoking Articles 370 and 35-A.

They called for immediate international attention on the existing situation in the region and especially urged the UN Security Council to take serious action against the Indian atrocities in the occupied land.

Separately, the Jammu Kashmir Liberation Front (JKLF) Europe zone staged a demonstration outside Indian Embassy in Brussels. They demand the release of JKLF leader Yaseen Malik and other political prisoners in Indian jails and condemned the Indian occupation of IOJK. Women and children also participated in the protest.