Amid the prolonged standoff with China in the border region, India, which used to seek a balance between China and the US, moved to cozy up to Washington, with the two signing a satellite intelligence pact and vowing to jointly counter the threat of China during Tuesday’s India-US 2+2 Ministerial Dialogue.

The US military help that could improve the accuracy of Indian weapons amid the China-India border standoff will make the pulses of some already excited Indian forces beat faster, and India is likely to stir up more and bigger troubles along the China-India border to aggravate the border situation, Chinese analysts said, noting that some of the troubles may come in the winter.

But there is absolutely no chance for India to reverse the reality of the military power gap between China and India, not to mention defeating China in possible military conflicts, analysts said.

India and the US signed the Basic Exchange and Cooperation Agreement (BECA) on Tuesday, allowing India to have access to US high-end military technology, logistics and geospatial maps.

At the press conference held after the 2+2 Ministerial Dialogue, US Secretary of State Mike Pompeo said that he had visited the war memorial to honor the Indian soldiers who “sacrificed their lives, including the 20 that were killed by Chinese People’s Liberation Army (PLA) in Galwan Valley” in June. He said “the US will stand with people of India as they confront threats to their sovereignty and to their liberty,” the PTI reported on Tuesday.

The US is touting India and provoking the relations between China and India, but India apparently was happy to accept Washington’s patronage as it believes it will boost its confidence in winning the prolonged standoff with China, analysts said.

Hu Zhiyong, a research fellow at the Institute of International Relations of the Shanghai Academy of Social Sciences, told the Global Times on Tuesday that India has gradually abandoned its traditional diplomatic principles of non-alignment and moved closer to the US. This unwise choice has seen India’s status in the eyes of developing countries greatly diminished and its strategic focus of a traditional geopolitical power gradually lost.

India’s attempt to move closer to the US is not a bonus point for India but a deduction which will compromise its traditional influence, as it will turn India into an unreliable “big brother” – as the country sees itself – for neighboring countries, including Bhutan and Nepal, particularly after India has already set a very bad example in its COVID-19 response, analysts said.

India and the US are also expected to sign the Maritime Information Sharing Technical Arrangement (MISTA), and India already has such agreement with two other Quad countries, namely Australia and Japan, the Hindu reported on Tuesday.

Qian Feng, director of the research department at the National Strategy Institute at Tsinghua University in Beijing, told the Global Times on Tuesday that with the signing of the BECA, Indian troops would have access to better tactical imagery during battles and they could use more American weapons, but it would be impossible for India to use outside forces to bridge the military gap with China, nor will the BECA give India an advantage in China-India military conflicts.

The US expects India to share statistics and intelligence on the PLA. However, Hu said that India would not possess a great deal of intelligence about the PLA given that PLA is very capable of camouflage.

The MISTA is only a technical pact used for joint drills between India and the US, which has no substantive purpose for Indian troops’ combat capability, Qian said.

However, the US boasts of strengthened defense ties with India may thrill some Indian forces and military officials who have been calling for strikes against the PLA in the coming winter, and India is likely to stir up more troubles in the China-India border at this time, Hu said.

Chinese analysts warned that the PLA has already prepared for the worst. China’s national strength, including its military force, is far stronger than India’s, and India would not want to see the consequence if a full military conflict takes place. 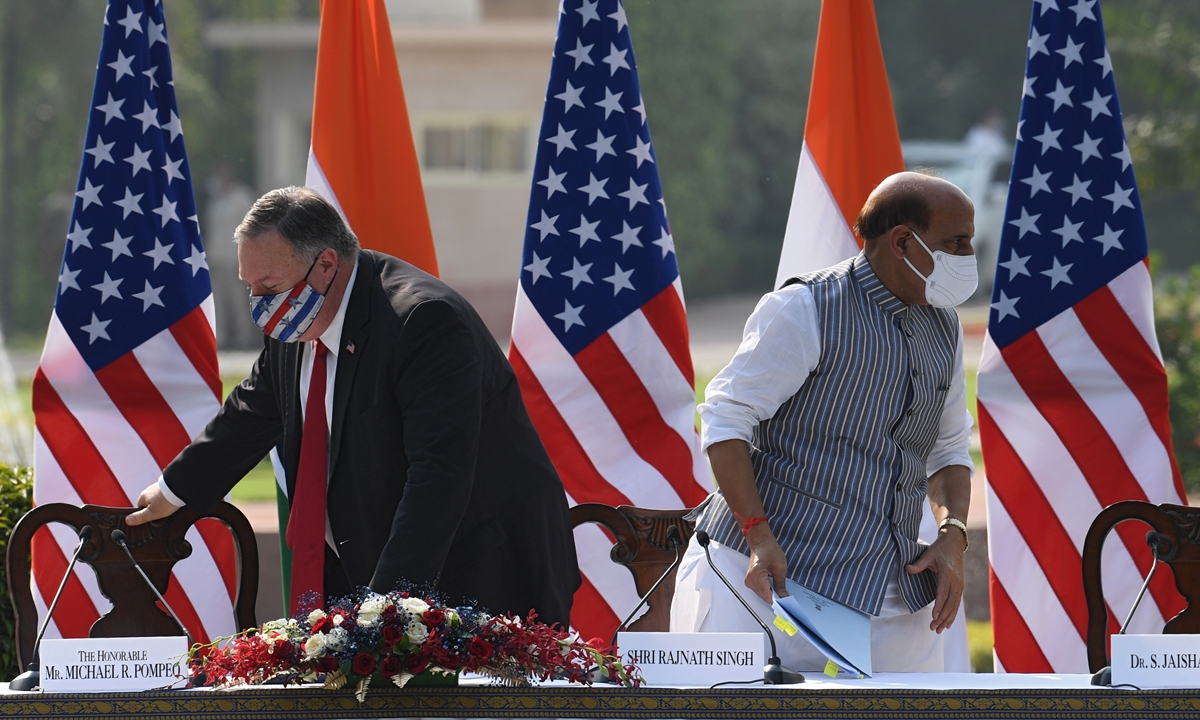 US Secretary of State Mike Pompeo (left) and India’s Defence Minister Rajnath Singh leave after addressing a joint press briefing in the lawns of Hyderabad House in New Delhi on October 27, 2020. Photo: AFP

No applause in South Asia

During the 2+2 Ministerial Dialogue, Pompeo stressed the need for Washington and New Delhi to work together to counter the alleged threat posed by China to “security and freedom,” the Times of India reported.

India has been moving closer to the US to spearhead the US’ anti-China strategy in the Indo-Pacific region, hoping to increase India’s leverage in negotiating border issues with China, contain China’s influence in South Asia and shift domestic attention from the Modi administration’s failure to control the worsening COVID-19 epidemic and economic downturn, Hu said.

Analysts predicted that India is likely to exceed the US in terms of the number of the confirmed COVID-19 in about a month, making it the country with the biggest number of cases in the world.

As a government whose head was once banned from entering the US, the Modi administration is now attempting to cater to the US and even hoping to become the “sixth eye” of the Five Eyes intelligence alliance. But the US is only using India out of a need to put pressure on China. If another border conflict similar to the one in 1962 takes place and China defeats India again, India would lose its strategic value to the US, analysts said.

After India, Pompeo will travel to Sri Lanka, the Maldives and Indonesia, where Western media believes “China has financed various infrastructures to the alarm of India and the US.”

With the mutual goal of containing China, India welcomes Pompeo’s visit to the three countries. While it may seem that collusion between India and the US means double the result with half the efforts, Chinese analysts said that with irreconcilable differences between India and the US as well as the independent choices of South Asian countries, neither side will achieve what they want.

India sees the Indian Ocean and South Asia as its own backyard, but the US will not just watch India become the head of the South Asia and do nothing, Hu said.

For South Asian countries, their interests lie in keeping sound relations with all major powers in order to maximize their interests and gain more investment, Qian said.

China has injected dynamics into the economic development of South Asian countries, while the US has not offered any similar projects nor will it invest them in the future. Thus Asian countries will keep their options open and will not cozy up to the US to go against China, Qian said.

Pompeo arrived in Sri Lanka on Tuesday to hold talks with President Gotabaya Rajapaksa and Prime Minister Mahinda Rajapaksa as well as the foreign minister and other officials. Ahead of his arrival, Sri Lankan officials told media that the country will not “bow down to foreign influence,” local media New 1st reported.

Ahead of Pompeo’s visit, China’s Embassy in Sri Lanka on Monday objected to remarks by Dean Thompson, principal deputy assistant secretary at the US State Department’s Bureau of South and Central Asian Affairs, who openly sowed discord between China and Sri Lanka to an extreme extent by urging Sri Lanka to take sides between China and the US.

We are firmly opposed to the US taking the opportunity of the US secretary of state’s visit to sow and interfere in China-Sri Lanka relations, and to coerce and bully Sri Lanka, the embassy said in Monday’s statement.