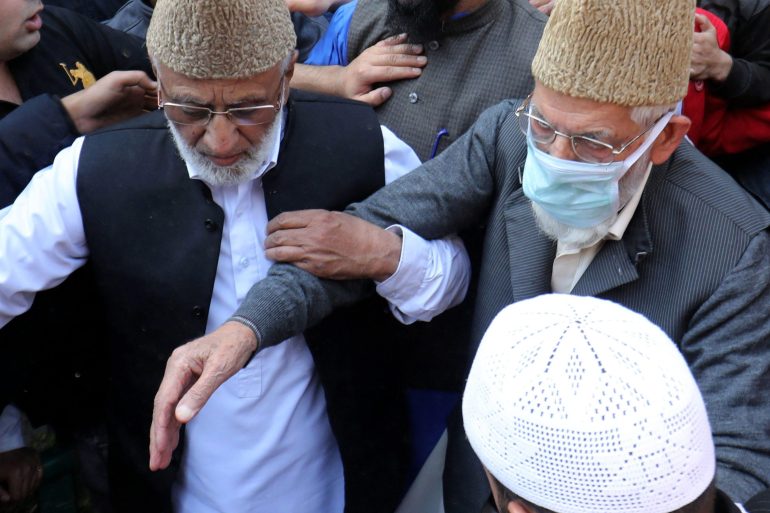 Geelani died on September 1 after a prolonged illness at his residence in the main city of Srinagar, where he had been under house arrest for years. He was 92.

For decades, Geelani headed the Kashmiri separatist group, All Parties Hurriyat Conference (APHC), which campaigns for either the region’s merger with Muslim-majority Pakistan or the creation of an independent nation out of the Himalayan territory.

Fearing a mass funeral procession over the iconic leader’s demise, Indian authorities “snatched his body” shortly after his death and hurriedly buried it in at night – without even the presence of his family members.

New Delhi also imposed a security lockdown and cut off internet and telephone services in anticipation of demonstrations and protests in the disputed region over Geelani’s death.

His grave continues to be ring-fenced by a contingent of Indian police and paramilitary troops, with multiple vehicles permanently stationed outside the graveyard in Srinagar.

Three weeks after Geelani’s death, there are questions in Indian-administered Kashmir over the future of its separatist movement against a backdrop of a series of repressive steps taken by Prime Minister Narendra Modi’s Hindu-nationalist government, especially since 2019.

In August that year, India unilaterally scrapped Articles 370 and 35A of the Indian constitution, which had granted the country’s only Muslim-majority region – also claimed by neighbouring Pakistan – a degree of autonomy, turning it into a federally governed territory.

New Delhi’s most far-reaching move in seven decades of Kashmir struggle was followed by a months-long security lockdown imposed in the valley and the arrests of hundreds of Kashmiri politicians, rights activists, separatists, lawyers and others.

Since then, the Indian government has imposed new laws governing property and land rights, which the Kashmiris fear aim to change the demographics of the region.

Geelani, many Kashmiris believe, was the last powerful separatist leader in the region, who openly challenged Indian rule and enjoyed overwhelming local support.

He quit the APHC last year but the organisation did not appoint his successor until his death. The new APHC head is 50-year-old Masarat Alam Bhat, who has spent 17 years of his life in prison.

Since Bhat remains in jail, many political commentators in Indian-administered Kashmir think his appointment as the new APHC chief will hardly have a significant effect on the ground.

Who is Masarat Alam Bhat?

Bhat, a Geelani loyalist, is a staunch anti-India leader who believes Kashmiris should be given the right to self-determination. He was expected to succeed Geelani after Ashraf Sehrai, the 77-year-old second in command, died in jail in May this year.

Sehrai was in detention under the draconian Public Safety Act (PSA), a law that allows a person to remain imprisoned for up to a year without trial.

Bhat, a science graduate, had a brief stint with armed rebellion against India in his teenage years before he was arrested and released two years later in 1993. After walking free, he co-founded the Muslim League, a pro-freedom group that was a part of the APHC.

Bhat is considered the brainchild behind the division of the umbrella organisation into two factions – hardliners and moderates – in 2003. After the split, Bhat joined the hardline faction led by Geelani.

The hardliners advocated for the resolution of the Kashmir dispute under a United Nations Security Council resolution and refused to engage with New Delhi.

In April 1948, the UNSC had passed a resolution, asking the governments of India and Pakistan to “create proper conditions for a free and impartial plebiscite to decide whether the State of Jammu and Kashmir is to accede to India or Pakistan”.

The Hurriyat moderates, on the other hand, used to take part in dialogue with India and Pakistan and were open to unconditional talks with the Indian government.

While Bhat has been a part of the separatist politics for over two decades, he gained widespread popularity in 2010 when he led thousands of youths in Srinagar who protested against the killing of Tufail Mattoo, a teenager, by the Indian security forces.

The agitation continued for months and saw the killing of more than 100 civilians by Indian forces. As India’s crackdown intensified, Bhat went underground from where he secretly issued protest calendars until he was arrested in October 2010.

The uprising turned him into a charismatic leader, mainly among the youth in Indian-administered Kashmir.

Bhat has been imprisoned since 2015 after he was booked under the PSA, legislation Amnesty International has described as a “lawless law”. Frequently, the PSA against him would be revoked and he would be immediately booked in another case under the same law.

He is currently jailed under a case related to alleged “terror funding”, like many other separatist leaders from the region.

‘Resistance did not die’

For the last two years, New Delhi has been successful in maintaining a tight grip on the portion of Kashmir it governs. A crackdown by the National Investigation Agency (NIA) on separatist groups resulted in many of their leaders being thrown into jails over alleged “money laundering” and other cases.

Meanwhile, groups such as the socio-religious Jamaat-e-Islami and the Jammu Kashmir Liberation Front (JKLF) have been banned for their “secessionist” ideologies.

The beleaguered separatist groups faced another setback with the death of Geelani, who was referred to as “Bab” (Father in Kashmiri) by his supporters.

Sheikh Showkat Hussain, political analyst and and academic based in the region, says Kashmir’s history has witnessed several moments wherein a group’s survival was seen through the lens of a popular leader.

But, he says, popular sentiments for the right to self-determination among the region’s residents have always overshadowed their leaders.

“Sheikh Abdullah abandoned separatism and joined the state as chief minister in 1975 when Pakistan had lost its eastern wing but resistance did not die. Rather, Sheikh’s abdication made separatism more profound and more mobile,” Hussain told Al Jazeera.

In 1975, Kashmiri nationalist Sheikh Abdullah signed an accord with the then Indian Prime Minister Indira Gandhi, under which he gave up the demand for independence and took over the reins of the state.

“I don’t think the death of a leader or any individual or changing sides by an individual will impact the resistance in a big way,” Hussain said.

Husain believes Bhat’s appointment as Geelani’s successor was “an obvious and expected move”.

“The situation is such that if they appoint someone who is outside (a jail), he would be arrested. There were two options for the new incumbent if he was outside: either go underground or get arrested,” he said.

“They can’t afford to go underground because Hurriyat professes to be an above-ground organisation and not involved in underground activities.”

Government officials in the region say the appointment of a jailed leader to head the Hurriyat Conference does not make any difference on the ground.

“In the 2010 agitation, Bhat was a mass leader. Because of his hawkish stand on certain issues, he was close to Pakistani circles or those who subscribed to that ideology,” an official, who refused to be named, told Al Jazeera, calling Bhat “a very honest and upright man”.

“But with time the rigidity in his stance on Kashmir has slowly diminished. We can’t call him moderate but the rigid mindset that he had in the beginning has slowly changed a little bit,” he added.

The official said in the current political scenario in Indian-administered Kashmir, Bhat’s appointment “means nothing” and “hardly counts”.

“He is in jail and he can’t do anything. And on the ground, the Hurriyat is dismantled.”

“I don’t think separatists would be able to make any significant impact on the ground due to factors such as the loss of Geelani, loss of popular support, and the constraints under which all political activities are operating,” he said.

Sahni, however, added that it would be premature to start making predictions about Hurriyat’s future.

“Given the political situation, the centre’s policies and the degree with which political activities remain constrained, all these factors would influence what the Hurriyat will be able to do,” he said.

“Also, Bhat and many Hurriyat leaders are now involved in criminal cases which will automatically limit their capacities for an open political activity.”

But Siddiq Wahid, a former vice-chancellor of the Islamic University of Science and Technology and political commentator from the disputed region, thinks Hurriyat’s “demise has been predicted many times before but such predictions reflect more a wish on the part of the predictors and less the situation on the ground”.