Female soldiers were sent to the restive region for the first time in May, but critics say the military still has a long way to go on gender equality. 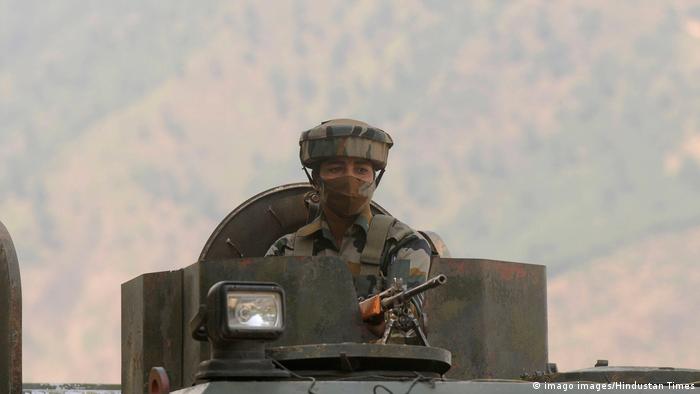 India has deployed female soldiers to the restive Indian-administered Kashmir region for the first time, in a bid to improve local relations and promote gender equality within the ranks of its paramilitary.

However, the efforts have drawn widespread criticism and questions over how effective the move is, both in strengthening ties with local women and improving gender equality within the armed forces.

In May, India’s Federal Home Ministry quietly shifted an armed battalion of Assam Rifles (a paramilitary force) comprising several women from the northeastern state of Manipur to Kashmir. The 34th battalion was stationed at Ganderbal, about 38 kilometers (23.6 miles) north of Srinagar city, the summer capital of Indian-administered Kashmir.

The female paramilitary troops were deployed at several motor vehicle checkpoints in Ganderbal, the route leading to the sensitive Ladakh region.

Soon after their arrival, the soldiers were seen frisking local women at checkpoints and trekking to different places to interact with local women and schoolgirls. They also held interactive sessions, in which the soldiers demonstrated their combat skills, and exchanged views on social issues. The female soldiers, who work together with their male counterparts, say they have an edge over male soldiers when it comes to interacting with women in the region.

“We are trying to give a sense of confidence to local women,” said 24-year-old riflewoman Rupali Dhangar from the central Indian state of Maharashtra. “The aim is to encourage them to move out of their routine household work.”

Military officials said the introduction of female soldiers is likely to make the Indian government’s anti-militancy operations in strife-torn Kashmir more effective, especially when dealing with local women during searches in residential areas.

“Our primary task is to ensure that women don’t face any inconvenience or difficulty during the anti-militancy operations. We will try to make them feel comfortable during search operations,” said riflewoman Rekha Kumari, 27, from West Bengal.

However, it remains to be seen whether the women’s involvement during the night raids and other anti-militancy operations is effective in allaying local fears.

Ghazala Wahab, the executive editor of Force magazine, believes that the military deployed women to the region “to address the allegations of sexual violence.”

Human rights activists say the Indian military has received complaints of male soldiers making sexually lewd remarks or gestures, inappropriate groping and even rape during the search operations in Kashmir.

“The involvement of Indian armed forces in these crimes was alarming in the 1990s, but now there has been a decrease [in such crimes] due to pressure from rights bodies,” said Sabia Dar, an activist with the Association of Parents of Disappeared Persons (APDP).

Dar told DW that the deployment of riflewomen is an attempt to showcase Indian armed forces as being sensitive toward the rights of Kashmiri women.

During a visit to Kashmir in September 2019, women’s advocacy network Women Against Sexual Violence and State Repression found that “school-going girls have to walk past army camps and are sexually harassed by the men in uniform. Often, security forces stand at the roadside with their pants unzipped and make lewd comments and gestures.”

With the controversial Armed Forces Special Powers Act (AFSPA) in place in Kashmir, armed personnel involved in any crime cannot be prosecuted without the consent of the Indian government.

Women ‘help us to break the ice’

The female soldiers could help “to break the ice” during search operations, said Colonel RS Karakoti, commanding officer of the 34 Assam Rifles.

“It is easier for us when riflewomen are part of the search operations. They help us to break the ice so that the searches go unhampered,” Karakoti told DW.

Ather Zia, a political anthropologist with the University of Northern Colorado, said the introduction of female soldiers is akin to the “gender-washing of war crimes in Kashmir” and selling “genocide as gender justice.”

“What is the riflewoman to the female political prisoners languishing in jails, to women who face grave human rights abuses and rape as a weapon of war, to women surveilled 24/7 along with their communities?” she asked.

Riflewoman Kumari, however, said the soldiers were not subjecting women to any inconveniences during the search operations. “We ensure that their rights are not violated and their feelings are not hurt,” she said.

Discriminatory policies within the army

The female soldiers said local girls now want to join them, although women are often the subject of discriminatory policies within the armed forces.

“They are giving us a good response and are eager to meet us again. Many of them want to join the Indian army,” said Kumari, who joined the Assam Rifles in 2017.

Riflewoman Dhangar believes, however, that there is still a long way to go in terms of gender equality in the military.

“Gender equality is still a far-fetched dream in the Indian army, and to deal with it, we have made ourselves mentally strong,” she said.

Female officers have been denied senior commanding positions, along with lifelong job and retirement security, unlike their male counterparts.

In March, the Indian Supreme Court ruled that the army’s evaluation criteria for granting the benefits to women was systematically discriminatory.